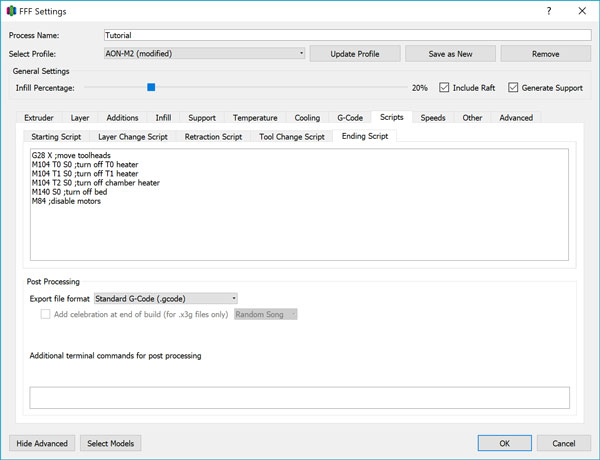 For advanced control of your 3D printer, Simplify3D gives the option of writing custom G-code scripts to be inserted into the main code at specific points. In addition to regular G-code commands, Simplify3D provides certain variables and macros for conditional programming. These include:

In G-code programming, a line break signifies the start of the next command, and a semicolon provides space for comments. Everything after a semicolon will be ignored until the next line break.

The Starting Script runs before the print begins but after heating. By default, Simplify3D automatically appends the heating (M104/140) commands before every print, but you can customize the heating and homing behaviour if you would like. This is a good place to apply things like custom PID values, toolhead offsets, or other configuration values without modifying the firmware’s hard-coded values.

The Layer Change Script runs between the end of layer and the beginning of the next. Potential uses for this include a nozzle wipe when using sticky/viscous materials.

Overrides the G-code automatically generated by the retraction-related process settings.

Overrides the G-code automatically generated by the tool change-related process settings. With the AON-M2, tool change movements are handled by the firmware, so this section can be used to modify the tool change retraction values. The default script provided in all AON-M2 material profiles (.fff files) is given below.

This script runs after the last printing move. The default script for the AON-M2 is given below:

Post-processing gives you access to scripting functionality directly within the Simplify3D interface.

Below are some examples of the tools available: